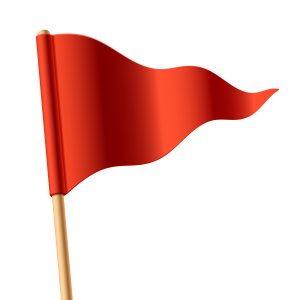 When should your relative with dementia no longer be left alone?  There are no easy answers, and the signs are not always clear. Here are seven more red flags that can help you determine when your relative may not be safe alone anymore. (We offered eight red flags in another blog post.) As you make decisions about the safety of your relative, consider these seven additional flags.

Red flag #8: Getting lost. Does your relative leave the house alone?  Go for walks?  The Alzheimer’s Association estimates that about 60% of people with Alzheimer’s disease will “wander” at some point in the illness (which really means that they get lost, often in a familiar place). If your relative is going out alone, it would be good to look at safeguards.

Individuals who are afraid to leave the house may be at risk in a fire or another emergency.  If your relative talks a lot about going home or leaving, she may be at risk for getting lost even if she has not walked out to date.

Red flag #9: Leaving the house at night.  Some people in the later stages of dementia get days and nights mixed up and may be up and dressed in the middle of the night.  If this is becoming a problem or if your relative has ever left the house at night, it is important to think about supervision at night. If she is alone nights and has left the house, she is probably not safe alone at night.

Red flag #10: Opening the door to strangers.  What does your relative do if someone rings the doorbell?  Does she open the door to strangers?  As people with dementia gradually lose the ability to make safe/good decisions and judgments, the potential for danger increases if she is likely invite a stranger in or give the person money.

Red flag #11: Giving money away.  Mail, phone, and computer solicitations can be dangerous for individuals with poor judgment.  Individuals with dementia are at high risk for financial exploitation from strangers or relatives.  Sometimes it is a matter of making donations, either giving small amounts repeatedly or giving large amounts. Repeated credit card purchases can lead to financial difficulties.  Others become addicted to internet gambling.

Red flag #12: Responding to emergencies.  Would your relative know what to do in an emergency, say, a fire in the house?  This is an important question to ask.  However, a person who can answer correctly may not actually be able to do what’s needed.  Ask her to demonstrate calling 911, leaving the house and going to the neighbor’s, using the fire extinguisher, etc.  If she is not able to respond appropriately in an emergency, how much risk are you as a family willing to tolerate?

Red flag #13: Calling frequently or exhibiting a lot of anxiety.   This is often a sign that your relative is feeling anxious and is looking for reassurance.  And why not? It’s frightening to forget important pieces of information that helps you understand what you are supposed to be doing!  Anxiety and a need for reassurance  may lead to safety risks such as leaving the house or inviting strangers in.

It’s hard to strike the right balance between being over-protective and ignoring signs that your relative is at increased risk.  And, of course, family members don’t always agree about how much risk is tolerable.  It can be helpful for families to talk occasionally together and assess how their relative is doing with each of these potential safety issues.

If you see lots of red flags, it may be time to consider relocating your relative with memory loss to residential care. Our book  Moving a Relative and Other Transitions in Dementia Care can walk you through the process.